In cities throughout the world, TechCrunch conducts pitch-off contests for new technology start-ups. Entrepenuers get sixty seconds to describe their idea to an audience and panel of judges.

On February 20th we filled out their submission form and a week later we received an email saying we were one of the 15 companies selected - AWESOME! 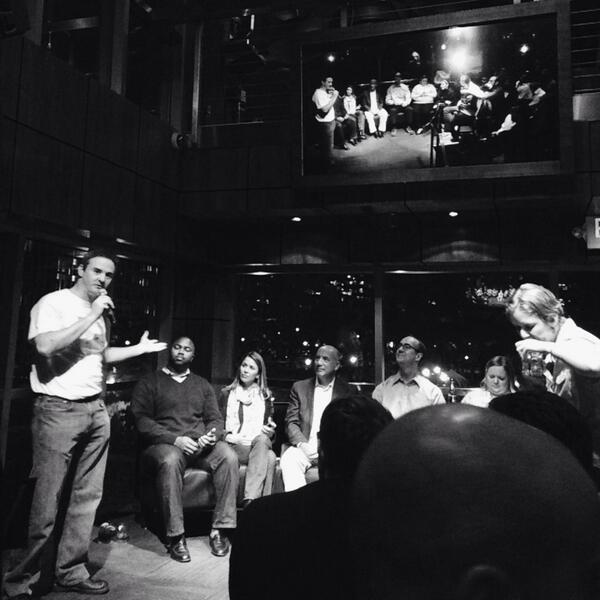 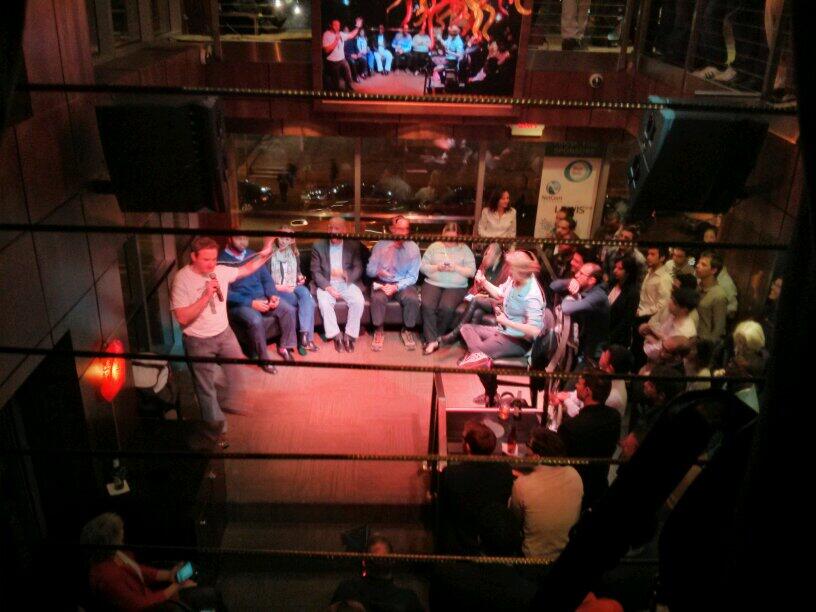 Before learning the details of pitching at this event, we were excited with the thought of turning the TechCrunch audience and their devices into a huge stereo system. Unfortunately, we learned that pitches are capped at 60 seconds and no one can demo their technology. Not being able to demo a SpeakerBlast was a bummer to hear, so we had to quickly devise a winning pitch. We chose to focus on selling SpeakerBlast to the audience rather then to the panel of judges & investors. We asked the audience to hold their phones up and wave them in the air. Further pondering, "Now wouldn't it be cool if we could collectively with our devices all become one huge stereo system?" "Well, with SpeakerBlast we can......"

Thankfully, going in this direction paid off and we are estatic to announce SpeakerBlast won TechCrunch DC's Audience Choice Award. WOO HOO!

A few weeks ago we learned that a journalist was interested in writing about SpeakerBlast. Unfortunately, SpeakerBlast did not work properly for this journalist and we missed a nice opportunity!

Since then we have been working hard to address the app's reliability and stability no matter a user's broadband Internet connection(Wifi, 4G or 3G).

We are excited to note we are making great progress in reaching our goal and will soon allow access to an even better, SpeakerBlast!

Funding in Our Own Backyard

After eleven months of testing our technology in our labs and in the field (turning audiences into stereo systems) we're happy to note it works SOLID on non-crowded 4G & Wifi connections! Thus, it is now time to increase our focus on marketing and business development! Thankfully, this portion of our journey will now be a lot easier as we just landed our first round of seed money from Accelerate Baltimore.

We were hoping to be selected as we'd prefer to grow our business locally first! Thankfully, Baltimore is slowly becoming a great place for tech - check out the growing The Baltimore Tech Facebook group.

The resources provided by Accelerate Baltimore will be used to expand our IP portfolio, marketing/business development and some other neat stuff we have in the pipeline! Further we are excited to work with Baltimore's successful entrepreneurs to expotentially increase business & usage!

We wanted to start off the new year by announcing that SpeakerBlast now works on Android (4.1 & higher) in the Google Chrome browser for Android.

Each time we demoed and ask an audience to join the Speakerblast we would hear, "Oh, no Android!" Thankfully, Google has continued evolving Chrome for Android to the point where audio now plays in sync alongside iOS devices and even other versions of Google Chrome (desktop/laptops).

We do want to note that the best Speakerblast experience can be enjoyed by selecting one of our recommended tracks. If you happen to select an audio track that is of not a high quality and then you have it playing in sync across devices with not the greatest speakers your experience might be lacking!

We'd like to thank Peter Corbett of iStrategyLabs and the entire DC Tech Meetup crew for allowing us to demo on October 22nd! The DC Tech Meetup is one of the largest tech meetups with a consistent attendance rate of 500 or more tech enthusiasts.

The day of the event and with all our events, we are a bit on edge since SpeakerBlast requires a SOLID & FAST Internet connection to work reliably. This demo we knew possibly hundreds could join in the SpeakerBlast, which worried us about stretching the limits of the event space's public Wifi. If you have ever been to a tech conference or event you may know first hand of how spotty Wifi Internet can be. Fortunately, Peter and the event space's Tech Manager, Roger put a lot of effort in creating & providing a very solid Wifi Internet connection. 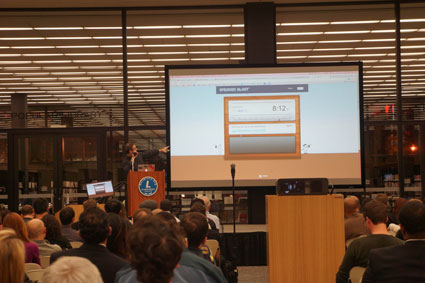 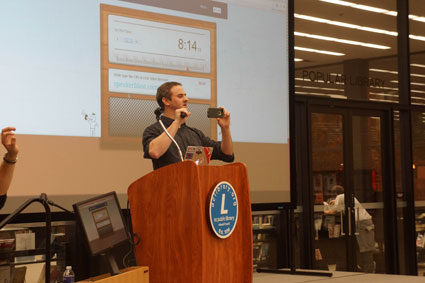 All in all, we held the largest SpeakerBlast to date, with 100 audience members' devices playing Beethoven's 5th Symphony in sync. Our data shows that 200 in total tried to join the blast, but those other 100 devices were Android devices. Please note we are working hard to make SpeakerBlast compatible on the hundreds of Android devices out there.

We had a great time on July 31st, 2013 presenting and even more so experiencing 50 devices playing audio in sync. The smiles and laughter heard during the SpeakerBlast was great to hear! Check it out....

We are based in and around the Washington DC/Baltimore area. In this region the technology scene and sector is vibrant and technologists and entrepreneurs are looking to get their technology in front of many.

Fortunately, technologists and entrepreneurs of the region get to demo and strut their stuff at Ron Schmelzer's monthly TechBreakfasts. Ron hosts 20 new technology companies a month at places like AOL in Northern Virginia and at Microsoft in Washington DC. We thought a TechBreakfast would be a great place to launch our beta!

The July 11th journey down to AOL in Northern Virginia started at 530am and I arrived a little before 8am. This demo was going to be the first in which more then 10 people/devices would be playing audio in sync. Needless to say I was a little nervous, but as seen in the pics below the demo went smashingly well!

Blasting Onto the Web!

We are happy and excited to announce Speaker Blast.

A Speaker Blast is to play the same audio file at the same time across multiple Internet devices to create one massive or small stereo system! It's a web app that works on iPhone, PCs & Macs and there is no download required!

This is an idea we weren't totally certain could become a reality on the web. We did have a blueprint of how we thought we could accomplish it, but we ran into a road block which just about derailed everything. Fortunately, we jumped this hurdle and are only a few weeks away from a public launch.